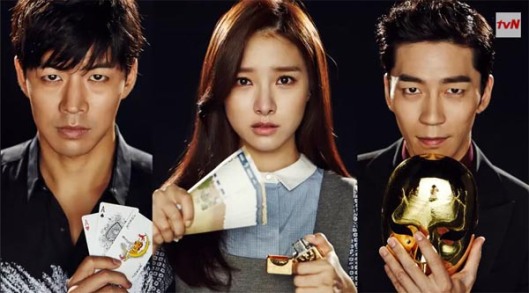 I think it’s a bit late for posting my first impressions but I started Liar Game just last week and now that I’ve seen all its six episodes, I’m here to give my thoughts on it. It hit the ground running right from its first episode. The drama is intriguing, having mystery, thrills, anxiety, tension and great characters. I haven’t seen the J-version and so thankfully there is nothing to compare Liar Game with, except to just enjoy every minute of it which brings so much fun, twists and turns.

The plot is basically about a variety show called Liar Game, which is produced and hosted by Do Young (Shin Sung Rok). The game has different rounds each day where the participants have to use their brains in order to surpass others. They can lie, cheat, deceive and strategize each of their move. Nam Da Jung (Kim So Eun) enters the game with a motive of gaining money to pay off her father’s debts who has left home and she doesn’t know his whereabouts. She is helped by Woo Jin (Lee Sang Yoon), who was originally a psychology professor but was in jail for one year on charges of fraud. He can read other’s lies by analysing their behaviours. Initially Da Jung is reluctant to lie or trick others but as the game proceeds, she somewhat uses some tactics but still believes in trusting others. Meanwhile, Woo Jin is suspicious of Do Young, in the way that the latter has more to do with this show and its participants, especially him and Da Jung, than just being a host and producer.

I have to say that this show, with its participants, put together, playing the game with not knowing what’s to come next, reminds me that eerie feeling when I read Agatha Christie’s And Then There Were None. There is a sense of urgency and tension. Furthermore, Do Young is such a fascinating character that one can never understand what is going on in his mind. Shin Sung Rok is again starting to scare me after his villainous turn in You From Another Star, more than that here because he is just like a mystery, so hard to decode. I love the games and how our protagonists play it.

I’m in love with Woo Jin and Lee Sang Yoon. He is hot, has brains and heart. His every move is so assuring but still he himself is clueless (yet) about what conspiracy lies behind Liar Game. Da Jung is cute and innocent to a tee but she doesn’t annoy me because that’s how she is. She always wants to believe in the best of others. Yes, this leads her to unwanted places but she never gets discouraged.

I’m a sucker for unexpected romance and when I got my first hint that there might be one between Woo Jin and Da Jung, I was on cloud nine. I’m just so happy with these two.

Another good thing about the drama is that it has carved out all other characters so nicely and I can easily identify each of the participants and their nature. Also I simply love the soft-hearted debt collector aka Dal Goo. It is so pleasant to see him caring for Da Jung and taking part in our hero’s investigations.

All in all, this is my current favorite and a fast-paced, different and solid thriller.