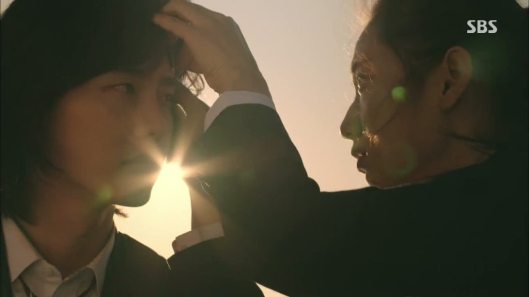 If a drama reminds me of Delightful Girl Choon Hyang even a little bit, that means it has done half the work of pleasing me. The newest drama on SBS’s Wednesday-Thursday slot aka Pinocchio did that and more. I liked the first episode already but the second one sealed the deal for me and now I love it! It has lots and lots of cuteness of the teenage love and relationship and many heartfelt moments which make it a perfect watch for me.

Here is a brief summary: Ha Myung (Lee Jong Suk) is a kid with a happy family that consist of father (a firefighter), mom and hyung. His father goes missing after a fire accident in a building. His team mates all die and their bodies are found except his. A witness claims that he has seen a glimpse of him on the street. This plus the insensitive media leads to accusations that he might have hidden after being responsible for all the deaths and saving only his own life. The family is given harsh treatment which amplifies due to constant media coverage that covers them in bad light, especially by a cold, heartless female reporter Song Cha Ok. This leads to mom committing suicide with Ha Myung, leaving behind hyung. But Ha Myung survives and is taken in by an old grandpa who thinks (because he has dementia) that he is his long-lost son and he names him Choi Dal Po. His other son comes back home from city with his daughter after divorcing his wife. The girl is Choi In Ha (Park Shin Hye) and she has Pinocchio syndrome due to which she starts hiccupping whenever she lies. She is sassy, bold and gutsy. She and Dal Po become friends but one day, he finds out that she is the daughter of that cruel reporter who led to the destruction of his family, even if it was indirectly. After this, he starts maintaining distance. Years pass and now they are in high school. He acts dumb to convince grandpa that he is his son but is actually a genius. In his heart, he actually likes In Ha but feels he shouldn’t and thinks that this feeling will go away with time. She also cares a lot for him but of course without showing it. 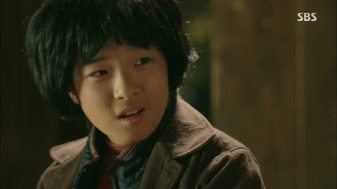 I love the bickering relationship between our leads. But at the same time there are feelings of attraction and awareness sprinkled throughout which makes it a lot more enjoyable. I simply loved the last scene of ep 2 when Dal Po reveals that he likes In Ha — it was so beautifully done with each of the previous scenes replaying from Dal Po’s angle. I know it’s very fast to see the love but as we have seen enough of the two together, including the adorable scenes of the kids, I can find myself being attached to this couple. And the way Lee Jong Suk looks at her with those puppy eyes full of affection, it melts me.

I like that Park Shin Hye is playing a bold and gutsy role here. I like how In Ha keeps on repeating her lies and hiccups keep on coming. It’s so much fun to watch without getting annoyed. I like that she cares so much for Dal Po and that whole scenario where she is in the library, then photocopying the issue cards and finally, charting out everything — it was a nice scene and reminded me of DGCH when CH tries to prove MR innocent. On the other hand, Dal Po is caring for her in his own way by participating in the quiz, the TV which he hates the most. I wonder what will bring him to this world later on. I liked his outburst in front of Gyo Dong (Lee Pil Mo) and like that the latter is changed after that tragic incident with Dal Po’s family. I feel more sorry for the hyung who lived all these years alone and I can’t wait for the two brothers to reunite.

Dal Po is such a nice character. The child artist did an amazing job to make me root for him right from the first episode. He is in a dilemma to believe what everyone was saying about his dad or to believe in him that he didn’t deceive anyone. I think it’s narratively a great thread to join Dal Po’s and the world of TV and media as a back story. For now, he is just happy in his little world but I feel so much for him. He does everything for others and has left his older life to get some peace here. I’m glad that now everyone knows that he is a well-read genius.

I loved the cuteness galore when the two leads wear that traffic cone. I think Lee Jong Suk is doing a great job as always and Park Shin Hye also looks cute. They have adorable chemistry. We are yet to meet more players in this game.

All in all, it’s love for Pinocchio ❤

2 thoughts on “First Impressions: ‘Pinocchio’ is cute and heartfelt”