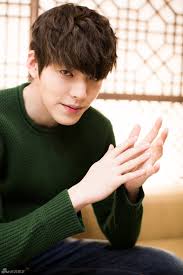 Well, this pairing is something I never imagined but when you think about it, it was very likely that these two highly popular young stars would act together. I think it’s more surprising (or shocking?) because there were no news articles or rumours about this project and suddenly out of the blue the news dropped that Kim Woo Bin and Suzy have been confirmed for upcoming drama from Lee Kyung Hee, the writer of hit melodramas like Nice Guy (2012), Will it Snow for Christmas? (2009), Thank You (2007), A Love to Kill (2005), Sorry I Love You (2004), Sang Doo, Let’s Go To School (2003) with her latest show being a long weekend one Wonderful Days (2014). I have seen only Nice Guy, which I found very entertaining even if the drama never touched me on an emotional level, neither did I get the main pair’s love. Judging from her past works, looks like this is also going to be a melo. Let me tell my reaction first — I love Kim Woo Bin and I’m so happy to see him back on small screen (which seemed unlikely as he was continuously doing movies since Heirs) that the possible disappointment because of the lacking acting talent of Suzy has been overtaken by the happiness I’m feeling like a schoolgirl going home for the holidays. And I’m glad that we’ll be seeing Suzy in a more serious role this time which is different from her past works where it was more of a bubbly, cute girl thing. I actually like her and she never annoys me but her lack of emoting and expressions (sometimes not even one expression) takes the whole fun of watching her work. Let’s keep our fingers crossed on this one. Her last drama was Gu family Book that came in 2013. Whatever maybe the case, but Kim Woo Bin and Suzy definitely make a visually appealing pair. The network where this show will air has not been declared yet and the working title is Lightly, Ardently or Arbitrarily Fond or Uncontrollably Fond — different translations of the Korean name.

The basic plot of Lightly, Ardently sounds as common as dirt present in the atmosphere. Kim Woo Bin plays a top star (a bossy, arrogant one) while Suzy stars as a documentary director (who has no pride and is money-oriented) who meet again after many years and got separated due to some terrible circumstances in their childhood. Can we have leads for once (especially in a melodrama) who don’t know each other since they were kids? I’m hoping that the arc given to the story would bring some new things in this premise. But I’m not complaining! Because — Kim Woo Bin — in a drama — as the main lead!

There is a long time before we finally get delighted by Lightly, Ardently as it’s slated for a 2016 premiere.