When I think of Kdramas, sci-fi sounds like a distant term as I haven’t seen many cases where the dramas have adopted this genre. The only proper example that I can think of is Joseon X-Files aka Secret Investigation Records. Yes, there have been aliens in some shows but then I would rather put them in fantasy genre than sci-fi. The upcoming tvN drama Circle definitely looks grand, experimental and something totally brand new as far as Kdramas are concerned. It is divided into two time periods — one set in present 2017 and the other in future 2037. And there is alien invasion as well!

In 2017, Part 1: Beta Project, Yeo Jin Goo (Jackpot, Orange Marmalade) is the main lead. He plays a college student who gets involved in a series of mysterious deaths. His timeline includes Ahn Woo Yeon (recently seen in Strong Woman Do Bong Soon) as his brother and Gong Seung Yun (Introverted Boss) as an engineering student.

In 2037, Part 2: Brave New World, the lead role is played by Kim Kang Woo (Goodbye Mr. Black). In this particular imaginary future, earth is divided into two societies — Smart Earth and Average Earth. The former consists of an environment free of negative emotions, crime and diseases. Average Earth is exact opposite, where lawlessness is uncontrollable and rampant. Kim Kang Woo plays a hot-tempered and determined detective of the latter who tries to move to the Smart Earth in order to solve a case which has some connection with the aforementioned case in 2017. Interesting. Costarring for this period is Kwon Hyuk Soo (Missing 9), playing a rookie detective and Lee Ki Kwang (Monster) as a government official of Smart Earth.

Circle will have both timelines playing parallel events instead of using any time travelling or time twister gimmick. I have to say the sui generis nature of the plot is the prime reason for my anticipation. Cast is really good as well. The directing is by the PD of SNL Korea and long running tvN show Blue Tower. Writing is by a team of various writers.

Circle premieres on 22 May and will air on Mondays and Tuesdays with a total of 12 episodes — that is something as rare as a blue rose. 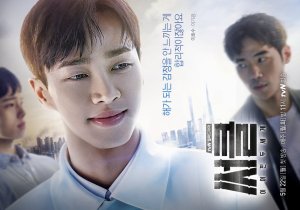