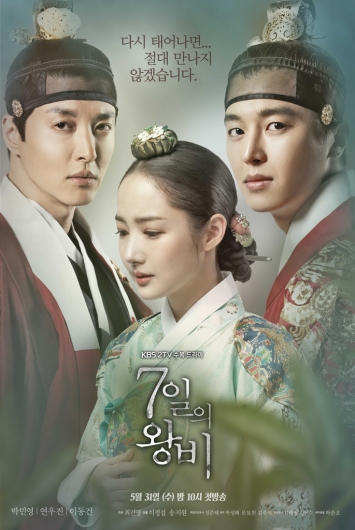 The Wednesday-Thursday slot of KBS is sending off one queen to welcome the other. Detective thriller Mystery Queen is followed by Seven Day Queen, a romantic melodrama with a historical setting. It stars Park Min Young, Yeon Woo Jin and Lee Dong Gun in the lead roles and looks extremely graceful and beautiful in the promotional stills and posters.

It is based on the tale of Queen Dangyeong of Joseon Dynasty who is known to have the shortest reign in Joseon history, equal to a week. History says that she was married to King Jungjong but was dethroned when her father, a political opponent to the king, led a coup against him. King Jungjong acquired the throne after overthrowing his brother Yeonsangun, who was a ruthless tyrannical king. The TV show has Park Min Young as Queen Dangyeong, Yeon Woo Jin as King Jungjong and Lee Dong Gun as Yeonsangun. Rest of the actors include Son Eun Seo (Voice) as Yeonsangun’s concubine, Chansung (of Kpop group 2PM) as our hero’s loyal friend, Go Bo Kyul (Goblin) as an intelligent noblewoman.

I love Yeon Woo Jin and really adore Park Min Young, who is always charming in all her roles. I also have a soft spot for Lee Dong Gun ever since I saw him in cute and underrated romcom Sweet 18. The former two have previously acted in sageuks (Sungkyunkwan Scandal, Dr. Jin, Ja Myung Go, Arang And The Magistrate) but it will be the first time when Lee Dong Gun is taking up a historical role. He was last seen in superhit weekend drama Laurel Tree Tailors. The cast is the major draw and the show itself looks splendid, but of course it is going to be a tragic tale of pain and heartbreak.

Seven Day Queen reunites Park Min Young with Healer director (who also helmed her Man Of Honour, along with shows like Neighborhood Lawyer Jo Deul Ho and Ohlala Couple.) A new writer has been attached to the project which will have 20 episodes in total and the premiere date is 31 May.

May is truly a drama festival month!