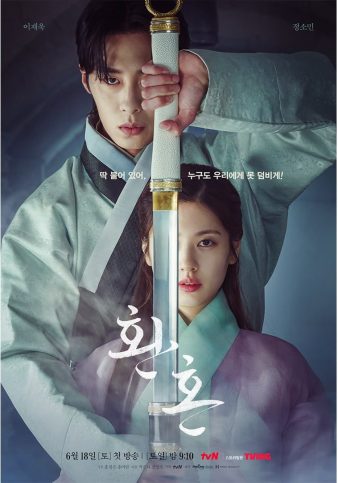 Alchemy Of Souls is a swashbuckling, sweeping epic drama that has an eclectic mix of adventure, magic, romance, humor, thrills and darkness. It is a fantasy drama that’s set in the historical era and it efficiently tells its compelling story. This is part 1 of the drama and season 2 would arrive in December this year with remaining 10 episodes. Long but the ride is totally worth it!

Set in a fictional country called Daeho, the story takes us to a world where magic and spells are common. One of the prime sorcery is the dark, forbidden magic of soul swapping. Jang Uk (Lee Jae Wook) is a man with a complicated story behind his birth. He is determined to learn spells. He gets help from an expert assassin Naksu (Go Yoon Jung) who is presumed dead but in reality, her soul is inside another woman MuDeok, played by Jung So Min.

One of the major requirements of a fantasy story is to have rules and play the story by those rules. There should be no room for convenience. Alchemy Of Souls deftly performs this job. It sets its rules without any meandering. In addition to this, the drama doesn’t spoon feeds the audience by telling them everything in one go. Instead it plunges right into the plot and elucidates the details and backstory as we go along.

The drama has a gripping script and it keeps you invested throughout the journey — delivering twists, thrills and emotional moments in spade. The plot could get complicated sometimes but we get the gist even if we forget/ get confused about some details.

The show is hugely entertaining, packing humour at various points. There is a great balance between fun or laughs and seriousness. There are copious edge-of-your-seat moments too.

I also love that unlike stereotypical drama stories where main lead is arrogant but second lead is the sweet guy, Alchemy Of Souls has both the leads as thoughtful, even if one is a bit immature and playful, while the other is a serious guy.

The cinematography is great, capturing the feel of an older era, nature or fights magnificently. The action sequences are done really well, with nail biting tension and flair. The music is good too. Hong Sisters have been one of my favourite writers and I’m happy that finally their show captured my heart in years. The last drama of them that I enjoyed and finished was The Master’s Sun. 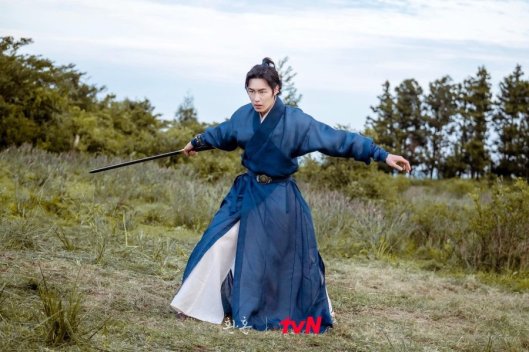 Jang Uk is a very interesting leading character. He is determined to become a great mage but at the core, he is an adorable person, with a dash of immaturity and light-heartedness. He has got great brain too despite the lack of timely education. He is cheeky and has a good heart. Lee Jae Wook is outstanding in every frame, and is truly endearing.

Jung So Min tackles three kind of characters perfectly — one is fierce, cold and sassy Naksu, the main one is MuDeok who has sassiness of Naksu’s soul but gradually we see her true nature of having a warm heart too. I absolutely loved her as she is a quick thinker and her cleverness helps her to tackle any adverse situation. The third role is that of the original person, Jin Boo Yun, who is a simple and good natured woman who got separated from her family during childhood. Jung So Min gives a sterling performance.

Go Yoon Jung as Naksu shows her talent and confidence in the limited scenes she got.

Hwang Min Hyun (or simply Minhyun) plays the quiet and broody Seo Yul. He is such a sweet guy, but can be assertive as per the situation. A truly righteous and rule abiding man, we see him helping his friends by breaking those rules at times. I loved MinHyun‘s portrayal a lot, he perfectly captures the quiet intensity of the character.

Yoo In Soo plays the funny and cute Park Dang Gu amazingly. He provides lots of light hearted moments in the drama.

Shin Seung Ho stars as crown prince Go Won. He is definitely one of my favourite characters on the drama. He is so unpredictable and he’ll surprise you after the first impressions. A perfect balance of arrogance and reluctant kindness. Shin Seung Ho shows amazing range in the role.

The four guys and one woman team would remind you of You’re Beautiful or Sungkyunkwan Scandal dynamics — especially Seo Yul has many shades of Shin Woo and Dang Gu has shades of Jeremy. Just like those classics, it’s a sheer delight to see their moments together in Alchemy Of Souls. The bromance is pretty good too. 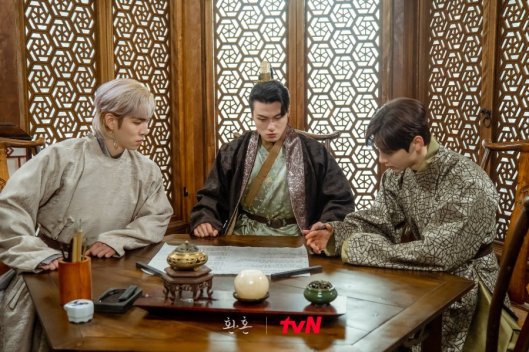 Alchemy Of Souls is one of those dramas where every character – no matter how small the role – is significant and written with deftness. It has a terrific ensemble cast.

Joo Sang Wook plays Jang Kang — the iconic mage who starts this tale. He is a strong presence throughout the show as the history unfolds bit by bit. 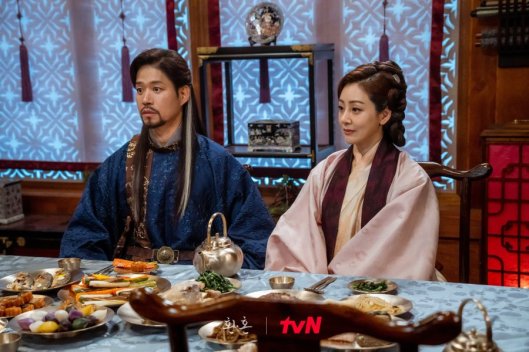 Yoo Joon Sang plays Park Jin, the head of Songrim, the place where the hero resides. He is an amusing person, bringing earnestness in serious matters but laughs in other instances where we see that he is a marshmallow in the matters of heart.

Oh Na Ra is lovely as Maidservant Kim, a character with lots of heart and warmth.

Im Chul Soo plays Master Lee Chul, another of my favourite character. Whenever Master Lee is onscreen, you just know everything would be all right. He commands respect and I loved how his character has a sense of humour. Lee Do Kyung plays Heo Yum, the physician at Songrim. Another character full of fun and his scenes with Master Lee are hilarious.

The main antagonist is Jin Moo, played masterfully by Jo Jae Yoon. He manages to be one step ahead of the protagonists but I really liked how he gets defeats too. This whole cat and mouse game between them is intriguing to watch.

Oh My Girl‘s Arin stars as Jin Cho Yun. I loved her arc of maturing from a pampered daughter to a thoughtful person.

Other characters and plots that gained my attention were Jin Ho Kyung (Park Eun Hye) and So Yi (Seo Hye Won). I’m surely interested in So Yi’s continued story and how her dynamics with Seo Yul evolves.

The relationship between Jang Uk and MuDeok/ Naksu is so unique because she is technically his servant but she is actually his mentor who teaches him fighting and spells. I absolutely loved them — their bickering, respect, understanding, thoughtfulness, angst and the process of falling in love— everything is beautifully done. Their moments also trigger some laughs. The chemistry between Lee Jae Wook and Jung So Min is simply perfect.

Then there is second lead romance arc between MuDeok and Seo Yul. It’s a bittersweet arc of first love. I really liked this dreamy, poignant track and despite being in love with the main couple, I enjoyed this secondary love story too.

The romantic arc between Cho Yun and Dang Gu is super cute and they are funny together. I also enjoyed her interactions with MuDeok. 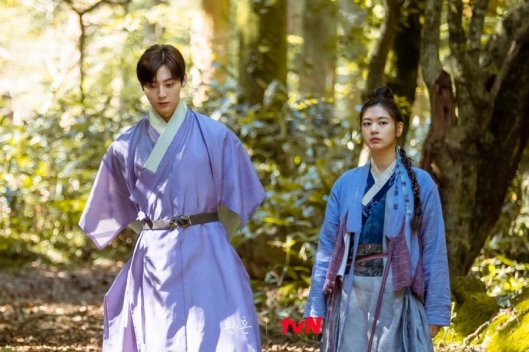 I immensely enjoyed the relationship that forms between MuDeok and crown prince Go Won. She is majorly responsible for him showing us his good side and their moments are punctuated with comedy. 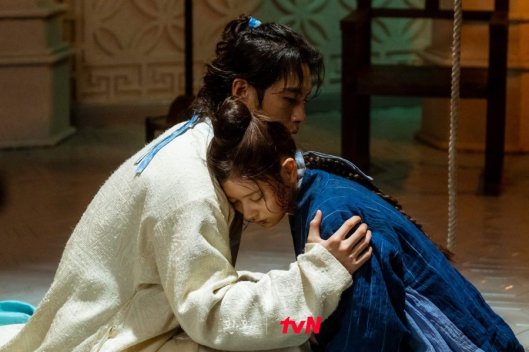 I think the drama could have done better with Jang Kang’s arc. It kind of seemed anti climactic the way it progressed in the end. Overall I don’t have anything much to complain about Alchemy Of Souls.

MY THOUGHTS ON SEASON 2 AND THE MAJOR CHANGE (Spoilers)

After initial sadness and annoyance that we won’t see the awesomeness of Jung So Min and her pairing with Lee Jae Wook as Jang Uk and MuDeok in part 2, I have accepted and understood the significance of changing the female lead to Go Yoon Jung. Ultimately, it’s the soul of Naksu that Jang Uk fell in love with and it makes sense that MuDeok’s body would go back to her original soul. A course correction after Big I guess. LOL. (spoiler alert! where in the end it’s still the new body instead of original soul the heroine fell in love with). I’ll definitely miss Jung So Min a lot though *crying*

Epic, grand saga of magic and love — told with humor, heart and thrills. 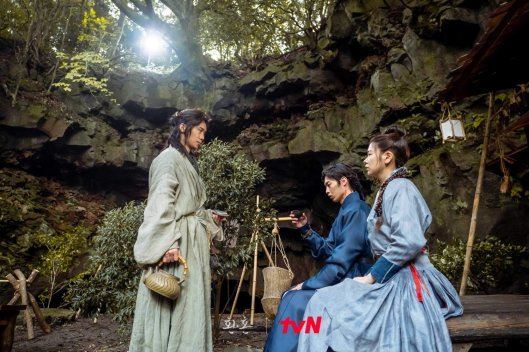