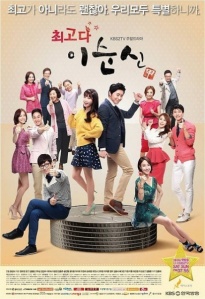 So I’m starting this new feature where I’ll be writing the episode summaries of dramas. Something like a mini recap (a full fledged recap is something nearly impossible for me :P)

Kim Jung Ae has three daughters. Lee Soon Shin (IU) is the youngest, who gets rejected in every job she applies for. Lee Yoo Shin (Yoo In Na) is the middle one, who has a good job and she keeps on nagging younger sister Soon Shin. The eldest daughter Lee Hye Shin (Son Tae Young) is married and has a daughter. She is back to her home after some years of living abroad with her husband. Her husband is supposed to come after a few days.

Shin Joon Ho (Jo Jung suk) is a successful agency head, whose father Shin Dong Hyuk (Kim Gab Soo) doesn’t like his work area. Also, Joon Ho has some past with the top actress Choi Yun Ah, when she left him as he was a wannabe music composer at that time. Song Mi Ryung (Lee Mi Sook) is another top actress, respected by all as she is working from many years. She works under Joon Ho’s agency. Jo In Sung (Lee Ji Hoon) is Joon Ho’s assistant-cum-best friend.

Park Chan Woo (Go Joo Won) is Soon Shin’s next door neighbor, who she likes. But he seems more interested in knowing about Yoo Shin, after he returns from his army duty.

Soon Shin finally succeeds to get a part-time job of a waitress at a big hotel. Joon Ho is present there because of a press conference organised for Mi Ryung.. Also, at the party, he meets Yun Ah, and tries to show a brave front and pretends oblivion, but actually he is affected by her presence. Soon Shin accidentally spoils Joon Ho’s clothes when she bumps into him there; and he asks the manager to fire her.

She is in a bad mood and meets a man on her way, who introduces himself as Shin Joon Ho, the casting agency head. He tells her to work with him as he can see a good actress in her. Surprised, she reaches home but everyone ignores this new prospect and her father tells her to forget about acting line. She is clearly disappointed, and also everyone forgets that it’s her birthday. Finally, her mother sees the calendar at night and also, she feels that it’s her fault that everyone ignores Soon Shin as she was busy raising her other two daughters. She decides to help her for this acting thing.

Meanwhile, Mi Ryung fires her assistant over some issue. He is clearly upset over this and warns her that he knows her secrets. He goes out and sees Soon shin’s dad on the street and remembers something.

Next day, Soon Shin’s mother takes her to the agency and there she waits for the director at a restaurant. Joon Ho also comes there and sees Soon Shin.