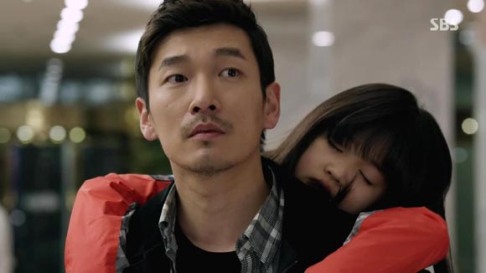 Okay, I’m amazed how God’s Gift – 14 Days managed to plummet from “one of the best shows this year” to “one of the worst shows ever” status for me. How can these writers just throw cold water on the viewers’ face with their crappy endings. The final scene of the drama is simply a hard pill to swallow. I’m so, so enraged right now that I simply can’t express it here!

So Dong Chan died. Why? Just like that. Some forecast of a woman he doesn’t even know said that only one of the two can survive, he deduced that he might be one of those along with Saet Byul, and he simply sacrificed his life—when he knew perfectly well that everything was happening due to some human beings and not any supernatural power that he can’t avoid or fight with. I am angry because the last scene was so out of character for him as thinking and acting rationally was one of his personality traits and he simply abandoned those and this can be applied to the earlier scene as well when he made himself arrested as the real murderer for Soo Jung. But we don’t even know what happened in that lake—there was a splash sound, so he might have died. And then, why Soo Hyun and Saet Byul are smiling as if nothing happened to their knight in shining armour! And don’t even ask about everything that was thrown at us in the last episode. The protagonists were being beaten up by the bad guys in each step they took and I would have digested all that only if the drama had given a satisfying ending. Alas, we didn’t even get that. And I seriously rolled my eyes after Saet Byul kept on getting captured again and again—all the tension just disappeared. All the conspiracies that secretary was able to pull off (for example, planning out the false call in Dong Chan’s mother’s voice), the reasons he explained for doing all the plotting — looked too contrived and hodge-podge.

And we can also consider it an open ending—but that is even worse because I think the writer couldn’t decide what to do next. He or she found the easiest way possible to come out of the dilemma—to go for a so-called epicness by sacrificing the hero (without any reason) but not make the viewers totally sad by confirming his death (which could have at least explained everything clearly). Or they might have wanted to give an artistic touch to the drama—meh.

The drama didn’t even bother to explain how Soo Hyun and Dong Chan travelled back in time. Were they some special people who got a second chance?

And what do I say about my shattered dream of seeing Dong Chan and Soo Hyun together at the end, along with Saet Byul *sobs*

So, after making us exercise our grey cells for 8 weeks, and making me love the show for 7 weeks straight, God’s Gift – 14 Days ended with leaving a very, very bitter taste in the mouth.

The saving grace: Jo Seung Woo, who masterfully and effortlessly delivered a nuanced and amazing performance, bringing both hearts and smarts to his role. I really want him to continue acting in more and more dramas and keep on making my day with his charming acting.

I don’t regret watching this drama at all as it reminded me how much I loved Jo Seung Woo after watching his film Classic and after entering dramaland, that sweet memory got faded a bit. But now I’m again a very happy fan of his 🙂