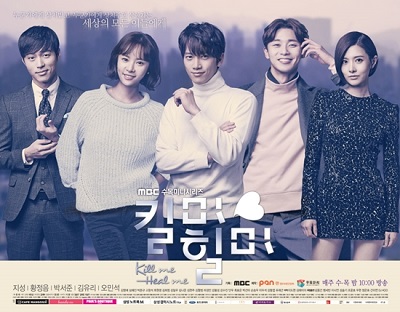 Kill Me, Heal Me marks the first premiere of 2015 in dramaland and has shaped up quite nicely since the hullabaloo in its initial casting rounds and finally securing successful pairing of Ji Sung and Hwang Jung Eum as the leads in this show about multiple personalities for the hero, seven to be exact. Ji Sung plays a third generation super rich businessman who suffers from multiple personality disorder after encountering some childhood experience due to which he has seven different identities while the heroine herself suffers from bipolar disorder but is also his secret doctor. Park Seo Joon (Witch’s Romance) plays her twin brother as well as a genius mystery writer who everybody thinks is an idiot. Kim Yoo Ri (Master’s Sun) costars as a cold woman and first love to the hero and the hot and talented Oh Min Seok from Misaeng plays his rival and cousin. I’m not necessarily interested in the drama as I can only watch one drama of this type which is Hyun Bin‘s comeback show Hyde, Jekyl, Me and I’m not a huge fan of the leads though I like Ji Sung and I’m indifferent to Hwang Jung Eum, having seen her in only Incarnation Of Money where she annoyed me most of the time. But I have to give it to the show for bringing out good promo materials, especially the warm and soothing posters which help in balancing out the over-the-top basic premise.

Kill Me, Heal Me starts today as the new Wednesday-Thursday drama on MBC taking over the slot from comedy Mr. Back. The writer penned ratings juggernaut The Moon That Embraces The Sun while the two PDs have shows like Hotel King and Scandal under their belt.

5 thoughts on “‘Kill Me, Heal Me’ is all set to premiere today”