I’m equally bewildered and equally feel great that I’m writing my third year-end review. From those who know me from the starting of my WordPress journey must be knowing that The Drama Corner is not my first blog. I tried so many times to finally stick with this one when I finally realised how and what I wanted to do, most importantly, I grew fond of writing. Hence, I’m so happy that blogging and this blog has become so special and a constant motivator for me.

2014 was the year when I dropped maximum dramas in my entire Kdrama period. It was due to a myriad of reasons, which include real life changes, time constraints, bad dramas, mediocre dramas, uninteresting dramas, protracted gaps between episodes et al. Hence you won’t find any of the following dramas that I didn’t like because whatever I disliked, I dropped it like a hot potato.

But still there were many shows that I loved and some that I liked. So here is the review for the dramas of 2014 that I watched and dropped. I’m adopting a grading system this time as there are enough nuances in how I give my love to these shows. The best rating is A++, then it goes like A+, A, A-, B+, B and so on. Also, the reviews are pretty small as I already have a different section for the long, elaborate ones.

DRAMAS THAT I WATCHED 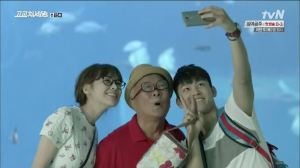 A charming, adorable show with adorable characters. Its speciality lies in giving a slice-of-life natural treatment to an over-the-top premise of disguising identities. Seo In Gook is winsome as a mischievous and warm high schooler and the main couple is soothing as a warm breeze. Be ready to meet an unconventional heroine who grows from being socially awkward to a confident woman, all the while maintaining her personality same. There is a cute and excellent bromance and lots of laughs. A hot second lead and a great camaraderie with a top-notch cast which also includes the supporting actors. and a cutest grandpa ever! 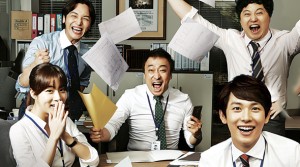 A sensitive, realistic portrayal of working class which touches a chord because it’s so relatable. Misaeng leaves all the K-drama tropes that we expect and paints a heartfelt and totally different picture of a common man in the country with problems and lives that ring so close to home for most of us. We swoon and melt — not for a romance but for the bromance and team work. There is so much heart and soul in this adaptation of a popular webtoon. The pace is unhurried as it adds to the overall effect of being thoughtful and poignant. The drama makes everyday issues of a workplace look like high stakes as we cheer for the guys to win each little battle in their journey. So much growth for everyone and there is no one purely evil here, just like normal people. Misaeng is definitely a heart warming ode to the common man. Acting is impeccable on all fronts.

An adaptation from a Japanese drama, this one combines its source material’s strengths with Korean elements to make a show truly adventurous and thrilling. We are constantly on the edge of our seats. All characters are deftly carved out and the drama has one of the best villains of dramaland who’ll make you feel chills down your spine, that’s a guarantee. The games are hard to understand at times but that never takes away the excitement. Lee Sang Yoon has never looked hotter and the drama has heart too. Now all we ask for is a second season, ok Show.

Fated To Love You

There is no way I won’t go for a marriage of convenience plot like a cat after a mouse but FTLY definitely deserves extra praise for making the main leads delightful and different in this world of arrogant jerks and candy heroines. We have a caring and thoughtful hero, who always encourages our heroine. Yes, he is eccentric and Jang Hyuk breathes life into this role and what we get is a combination of hilarity, hotness, swoony romance from him. Our heroine is as strong as the wind but of course in a low-key way. They both make a sterling pair and their romance is cute, sexy, heartfelt and funny. The secondary characters also help in elevating the fun factor and music is good as well. The drama could have done without the extra melodrama in the later episodes.

Prime Minister And I 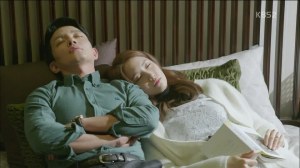 Cheers to 2014 for giving me another contract marriage show. PMAI is a simple and sweet show that pleasantly surprised me with amazing chemistry between Lee Bum Soo and Yoona. Especially she was a revelation because she brings so much charm and bubbliness to her role. I love that our hero is so thoughtful and considerate while the heroine is full of joie de vivre. They make a rare couple who have meaningful conversations with no place for much misunderstandings. Another great aspect is the heartwarming family we get to see. I swooned and felt giddy in all the romantic accidents and interactions. My only gripe was the ending which was a letdown after the awesomeness the drama was embedded with earlier. All in all, a cute and fun watch.

You From Another Star

The biggest hit of the year by all means, YFAS is a drama I can best describe as one with never a dull moment. It kept on bringing one interesting thing after the other without giving any space to boredom or lame plots. Also, it maintained its comedy from start to finish which made it a really fun ride for me. Jeon Ji Hyun gives a live wire performance with a role that redefined her stardom. She just steals your heart with a role of a top star who has her heart on her sleeves and Kim Soo Hyun nails it as an alien who looks young but thinks like a grandpa. The pair has great chemistry but they didn’t manage to steal my heart and made my stomach feel butterflies. I really enjoyed the combination of rom-com with the serial killer thrills with Shin Sung Rok playing the scary bad guy. The second leads were very mediocre though.

A breezy, zippy, summery drama that is equally funny and romantic. It gives a fresh as mint treatment to the done-to-death plot of fake relationship. The drama spins the familiar yarn with threads of innovative execution and brilliant chemistry between Yeon Woo Jin and Hang Groo, who are lovely individually as well as together. There are lots of hilarious moments and I love the twist we got to see in each episode that differed from what we expected when a particular scene was shown at the beginning. The second leads are dull and weirdly crafted but the dynamics between our heroine and her to-be mom-in-law is great. It’s an exhilarating show with a true feel-good narrative. 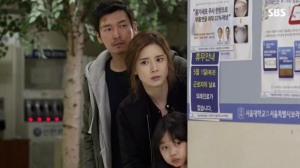 Oh this show. It makes me angry and sad whenever I think about it because of how breathtakingly good it was throughout its run only to deceive us with its horrible ending. The show keeps us on the tenterhooks, biting our nails with non-sop thrills and chills. There is so much mystery and suspense with a fantasy element (that never got explained) which is like solving a puzzle. It keeps on tossing up surprises. I loved the way our protagonists try to join the dots and also the twist that not one but both our leads travel back in time. One cannot trust anyone and that gave so much tension but all in a good way. Jo Seung Woo is AMAZING with Lee Bo Young giving another excellent acting turn as a mother who is desperate to save her daughter. It could have easily been one of my favourite offerings of 2014 but the ending left a very bitter taste that I don’t even want to remember it!

GRADE: A+ till the penultimate episode but D for the ending.

DRAMAS THAT I DROPPED

I blame the extended period for which I kept this show on hold more than the drama itself for dropping it. But there weren’t many interesting things happening in ANL that could hook me to come back. I did like the initial set-up with our hero turning a new leaf in his life after suffering from amnesia but then it felt like nothing was really taking place. The hi-fi law and financial conversations were boring and Greek to me. Also I didn’t like that there was not much development with respect to our leads’ relationship, even if it was not necessarily romantic.

I have to say that Three Days was not bad. But there were many things that were bothering me. The lazy pace which is the last thing I want from a thriller. A plethora of flashbacks left and right and visible technical flaws.

Yawwnnn. I liked the mashing up of rom-com with murder mystery at first but with each episode, I found my interest waning and the camera that showed everyone’s faces too close was another annoying factor. LOL. I finally dropped it when I realised that I’m looking at the time left to complete the episode more than the scenes.

Rain was the only reason for checking this drama out that had a mothball premise of a man falling for the sister of his dead girlfriend. At first, I did like the drama even when everything was so typical. It was a collection of stereotypes that we have seen in every drama out there as if the drama was ticking them off on a list. Candy heroine? Check. Loansharks? Check. Pat time jobs? Check. Hero’s daddy issues? There’s that too. I still liked that the hero was not a cold fish but was caring and also his rapport with his adorable dog. But then the drama became boring, dull with no struggle on heroine’s part to become successful. She was talented. Period. Also, the main flaw is the lazy writing that never worked hard for bringing anything interesting. No proper depiction of entertainment agency life of trainees and some characters (like Hoya) disappeared midway. Krystal looked pale and dull and proved that she is still not ready to be the main lead. I wonder why Rain signed on such a show which was as dull as dishwater.

I only watched 3 episodes but got bored after that.

Real life put a break after its premiere episodes but then the report was SO BAD on this show that I didn’t have the courage to pick it up again.