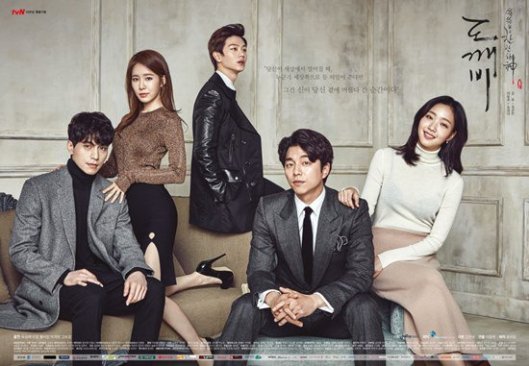 Now this is what I call a large-scale show from every angle. The Lonely Shining Goblin or simply Goblin screams blockbuster from its very first frame. It has a movie-like quality, especially in its sageuk scenes (the history portion) and it is grand, not only in style but also in content. And of course, the star cast includes the hottest names. Hit drama writer Kim Eun Sook has another ratings winner in her successful filmography.

Goblin has a very distinct mythology in its plot. We have a man (Kim Shin, played by Gong Yoo) who lived as human many centuries ago but was given a reward (or punishment) after he dies according to which he will keep on living on earth till the day he finds a bride who will remove the sword from his chest. Then there is grim reaper (Lee Dong Wook) and a girl who can see ghosts (Kim Go Eun). What is quite odd about this drama’s environment is the fact that it looks like magic and fantasy is the norm and no one is surprised when magical things happen or heard around them. Like Eun Tak’s reaction (even if she is ghost seer) on entering Canada via a door, it was as if she simply entered some fancy park and not another country miles away! Or Duk Hwa’s oh-it’s-so-normal face when Shin tells him he is a goblin. I think some clarity was needed about how everyone is acquainted with the mystical world. This is my only small complaint, along with the looooong length of episodes (why tvN why?).

There is so much mention of divine force in the drama and I’m intrigued by the world it has created and the unravelling of rules. I simply love our hero who is this lonely being and lived a miserable life, seeing his loved ones go one after the other. I love his new connection with Eun Tak and his curiosity about her. Even I’m curious about how they are connected in the supernatural way. I love the dynamics between him and the grim reaper. They talk about heavy things and then sometimes they become so childish in their petty fights and arguments. I’m also enjoying the grim reaper character — he is so deadpan. Although we only saw Sunny (Yoo In Na) in a brief appearance, I liked her a lot. She is so eccentric but good-hearted as we see how she helps Eun Tak. I’m also wondering about Samshin, played by Lee El — who she is exactly? Lastly, our heroine Eun Tak. She is cute and bubbly but I do want the drama to give some time in understanding her in a better way. She looks so instinctive — what exactly is her thought process. It looks more on a surface level. But I’m enjoying her cute and funny encounters with our hero.

Overall, I’m liking the drama and can’t wait for more!

6 thoughts on “First Impressions for ‘The Lonely Shining Goblin’”